The Caucasus region is located at a crossroad between Europe, Central Asia and the Middle East. Historically, the region has been dominated by different empires, including the Ottoman Empire, Persia, the Russian Empire and the Soviet Union. Ethnically, the Caucasus is one of the most complex regions of the world. More than 50 languages, including Turkic, Iranian, Slavic and indigenous tongues, are spoken in the region. The Caucasus is also a meeting place for different Islamic, Christian and pre-Christian religious traditions. 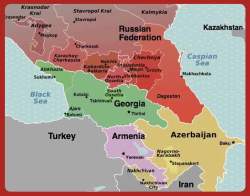 Since the dissolution of the Soviet Union and the end of the Cold War, the Caucasus region has gained a new strategic significance. Regional great powers again compete for political influence in the region and for control over its strategically important energy resources. New external actors, notably the USA and the EU, also seek to obtain influence in the region.