We often think about the Caucasus as the crossroads of Asia and Europe. Add another ancient road to this: Africa! At archealogical excavations in Dmanisi 1.75 million years old Hominid remains have been discovered. (reconstructions below).

As noted in the UNESCO World Heritage description (http://whc.unesco.org/en/tentativelists/5225/), this is the earliest Hominid remains beyond Africa. 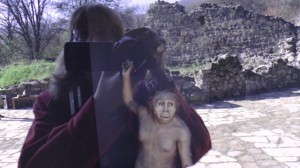 Dmanisi is located 85 kilometers south-west of Tbilisi. The site includes remains from the most ancient period of settlement as well as later stone, bronze and historical Middle ages.