Today, on November 15, the central Rose Square and Rustaveli Avenue i Tbilsi, were  closed for traffic. From the morning police vehicles and hundreds, or most probably several thousand, policemen lined up along the avenue, blocking off side-streets. 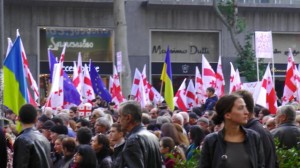 By 3 o’clock the square was packed with demonstrators, gathering with flags and banners. Among the Georgian flags were many EU flags, US and UK  flags, Ukrainian flags. The banners carried slogans such as  “Stop Russia”, “Russian troops – get out of Georgia”. 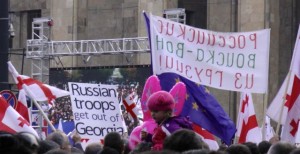 The rally is a protest against “Russia’s occupation” of Georgia’s breakaway regions. It is organized by the opposition party United National Movement, which criticises the current Georgian government for  not being sufficiently active in countering this development.

Some news links on the event